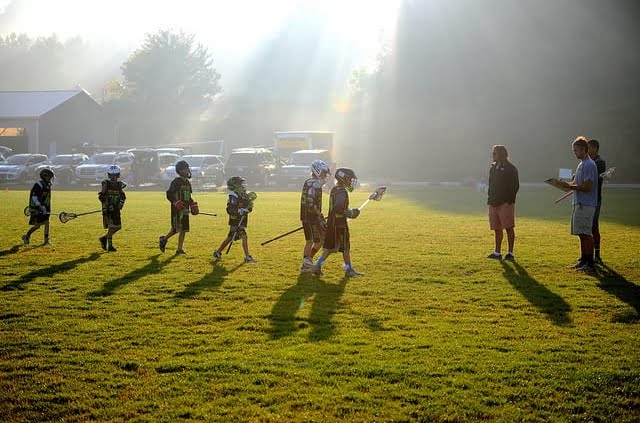 We are on the field and in the stands every day watching what different high school and college coaches are doing with their teams to get ready for game time. Here are 8 ways you can upgrade your pregame warm-ups to get your players feet and sticks moving and maximize their touches on the ball.

Not all of us have the luxury of an hour or hour-and-a-half to warm up on the field before every game. You need to make the most of that time if you want your players ready to go 110% once the clock starts.

Every coach has their own favorite ways to get their players in physical and mental shape before big games. Every athlete needs time to stretch, warm up their muscles and joints, and to give their muscles and minds plenty of reps with the exact motions and situations they will see when the first whistle blows.

To do this, make sure you are maximizing the number of times your players touch the ball, and keep them moving at a relaxed pace throughout their warm up drills. This goes for practice too.

Here are 8 drills we see good coaches using in their pregame warmups:

We saw these great passing and catching warm-up drills at summer camp for one of the top DI teams. Work on multiple skills at once to get your team through line drills in less time! It only takes one more second to get each player an extra catch and throw while they're in the drill. Do twice as much work in the same amount of time.

Run these Extra Pass drills in one group of Midfielders, one group of Attack and Defenders. Or work in small groups to get each player more reps, more muscle memory, and more conditioning.

Use these passing and catching drills to practice moving the ball with both hands both directions, picking up grounds balls, dodging, rolling away from pressure, anything your players will do in a game.

The best thing about Inside Out warm-up drills is that they imitate the same distances and positions your players are going to see on the field. It doesn't matter if you use them during practice or before a game, setting up your passing and catching, ground ball, or dodging drills around the goal will give your players more experience in realistic game situations.

Plus! Warm up your goalies in the middle while the rest of your players work around the outside. Your goalies must concentrate on the shots coming at them with all the extra activity going on, just like they will see at game time.

We saw the Defenders for a top-5 college lacrosse team running the classic Star Drill before a game earlier this season. All the Defenders were in the alley outside the goal area box while the rest of the players were shooting. They were only 10 yards apart, making tons of simple catches and throws with their hands choked half-way up on their long poles.

The Star Drill is  classic for a reason. Your players have to focus on passing, catching, communicating, and moving through the middle of the drill. Catch the ball from one direction, look, pass and move it another direction through lots of traffic.

We see lots of coaches running this simple Footwork and Ground Ball Drill in the alley outside the goal area box on both sides while the Goalies are still getting warmed up.

You can run it in groups of 2 or 3 for extra passes and touches on the ball.

This simple drill starts with some Defensive Footwork for guarding the man with the ball.  It then becomes a ground ball, passing and communication drill.

This drill is so simple you can have your players run this drill themselves in small groups or by position (Midfield, Defense, etc.).

We saw a few NCAA teams using this great dodging drill during Conference Playoffs last season. Your players will get plenty of touches catching and throwing, plus they can practice their "moves" before game time!

This drill gives your players lots of chances to practice any Dodge they want to work on with both hands. If you want your players to throw good Split Dodges or Roll Dodges in games, they should probably do 10 or 20 or 100 of those moves before the game, either in practice or in your pregame warm-ups.

We see lots of coaches running the Classic "Man/Ball" Drill in the alleys on both sides of the goal area box while the Goalies are still warming up taking shots.

Man/Ball is a classic for a reason. Picking up loose balls results in extra possessions and extra chances to score. You can't expect to win if you can't pick up the ball.

Get your players a little bit of contact before they go into the game. Two players must work together to scoop the loose ball and move it right away. The lone Defender has to get in there and fight for the loose ball. All great things to do before you get on the field!

You could also run this same drill with a 3-on-2 situation on both sides of the goal area box.

We saw this rapid-fire shooting drill from another Top-10 NCAA team in pregame warm-ups last season. Do this drill with your players to work on dodging, passing, and finishing in tight on the Crease!

We love this drill because it gets your players Dodging and passing, scoring those crucial lay-ups, and it's great work for your goalies to see tons of shots in a short amount of time.

When we watched the college guys do it, the Goalies had already warmed up with literally hundreds of shots before the game even started.

4-on-3 Fast Breaks happen multiple times in every game, especially with youth and beginners. No matter what level you coach, make sure your team understands how to work the numbers advantage so they can score!

Imitate game situations, give your offensive players time to move the ball and go to the goal, get your Defenders moving their feet and communicating who is guarding the ball. Get your Goalies to see some live action shots!

This is the last thing your should probably do before the game starts. Work your way up to 5-on-4 and 6-on-5 Breaks by adding in players on both Offense and Defense. They should be pumped up by now! 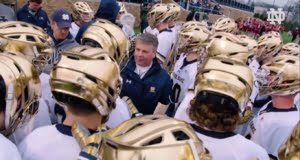 It's been at least two years, and we still see Notre Dame Head Coach Kevin Corrigan using this pregame drill to get his Goalies throwing Clearing passes, his Defense crashing back to the "Hole", and his Offense moving their feet and moving the ball to put shots on target.

Make sure you work on all these in practice a few times before you bring them out on game days.

Try it out and let us know how it goes for your team at your next game!

This site uses cookies. By continuing to browse the site, you are agreeing to our use of cookies.

We may request cookies to be set on your device. We use cookies to let us know when you visit our websites, how you interact with us, to enrich your user experience, and to customize your relationship with our website.

Click on the different category headings to find out more. You can also change some of your preferences. Note that blocking some types of cookies may impact your experience on our websites and the services we are able to offer.

These cookies are strictly necessary to provide you with services available through our website and to use some of its features.

Because these cookies are strictly necessary to deliver the website, refuseing them will have impact how our site functions. You always can block or delete cookies by changing your browser settings and force blocking all cookies on this website. But this will always prompt you to accept/refuse cookies when revisiting our site.

We fully respect if you want to refuse cookies but to avoid asking you again and again kindly allow us to store a cookie for that. You are free to opt out any time or opt in for other cookies to get a better experience. If you refuse cookies we will remove all set cookies in our domain.

We provide you with a list of stored cookies on your computer in our domain so you can check what we stored. Due to security reasons we are not able to show or modify cookies from other domains. You can check these in your browser security settings.

These cookies collect information that is used either in aggregate form to help us understand how our website is being used or how effective our marketing campaigns are, or to help us customize our website and application for you in order to enhance your experience.

If you do not want that we track your visit to our site you can disable tracking in your browser here:

We also use different external services like Google Webfonts, Google Maps, and external Video providers. Since these providers may collect personal data like your IP address we allow you to block them here. Please be aware that this might heavily reduce the functionality and appearance of our site. Changes will take effect once you reload the page.

The following cookies are also needed - You can choose if you want to allow them: